The Bochum-Gelsenkirchener Straßenbahnen AG, or BOGESTRA for short, is a municipal local transport company in the central Ruhr area. It operates the local public transport in Bochum, Witten and Gelsenkirchen, with buses in Gelsenkirchen being primarily run in the north of the city. Moreover, it provides most of the public transport services in Hattingen. Further lines lead to Castrop-Rauxel, Dortmund, Ennepetal, Essen and Herne, and there is a stop at the station Hagen-Vorhalle. BOGESTRA is a member of the Rhine-Ruhr Transport Association (Verkehrsverbund Rhein-Ruhr, VRR).

BOGESTRA is striving to raise customer satisfaction by offering their passengers greater convenience when purchasing tickets. To this end, the transportation company decided to replace some of their existing ticket vending machines. Not only were the new machines to have significantly more user-friendly features, but above all, they were to be sustainably prepared for future technologies while achieving the lowest possible life-cycle costs. In a Europe-wide tender, ICA Traffic provided the best solution and finally prevailed over its competitors.

The challenging task was to replace 50 ticket vending machines by new state-of-the-art machines and to put them into operation within a short time. ICA Traffic chose the DUALIS 2000 S, the advanced ICA ticket machine of the latest generation. This machine does not only support the known payment methods, but also enables modern contact and contactless payment such as, for example, Paywave, Paypass and GiroGo. Another fundamental advantage and convenient additional benefit for passengers is the banknote recycling function. The new ticket vending machine has an integrated module which enables it to return banknotes as change. In addition to that, all ticket machines are equipped for future extensions with new functions. These include electronic ticketing, on the one hand, and extended communication options, on the other.

Jörg Metzger, Sales Manager at ICA Traffic: “We are happy that BOGESTRA has once again placed its trust in us and that our offer was able to out against the many other solution approaches. When it comes to vending machine ticket sales, BOGESTRA is now ideally equipped for the challenges of future mobility requirements.” 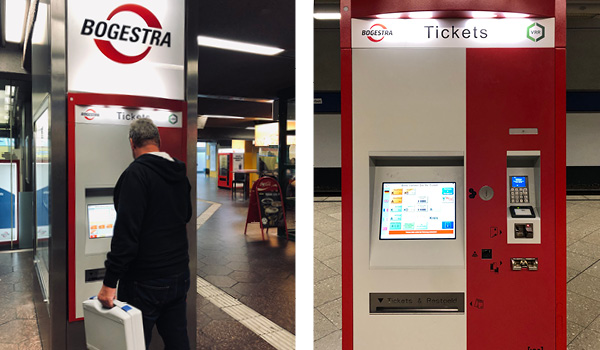